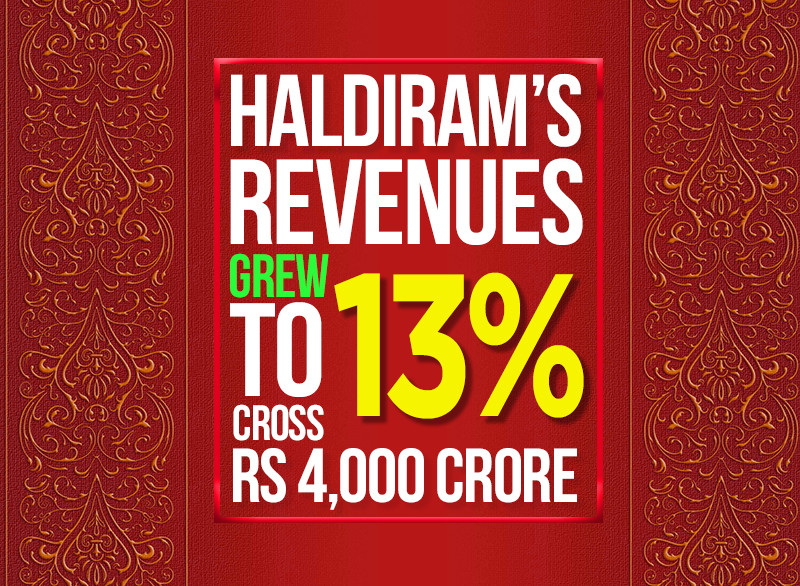 With a 13 percent increase in the revenue, Haldirams has emerged twice the size of Hindustan Unilever’s packaged food division; Nestle Maggi. Its revenue for FY16 crossed Rs 4,000 crore, defeating the combined turnover of the two American fast food rivals; Domino’s and McDonald’s.

The company enjoys a formidable presence across the country with three distinct areas of operations- Haldiram Snacks and Ethnic Foods (annual sales- Rs 2,136 crore) , Nagpur based Haldiram Foods International (annual sales of Rs 1,613 crore) and Haldiram Bhujiawala ( annual sales Rs 298) crore that cater to the northern, western- southern and eastern regions respectively. These figures hold a mirror to the fact that the good Indian palate prefers local savouries over the MNC brands.

Kamal Agarwal, a fourth generation member of the founding family stated, “We have increased our reach and developed products in-house that ensure quality control. We also understand Indian palate well and that comes handy while launching new products.”

The brand which started as a small shop in Bikaner in 1937 is now pioneering the food snack industry. It has survived through various highs and lows to reach at the pedestal of success. According to various experts, Haldiram’s could have more than Rs 5,000 crore in retail sales.
With the years of genuine service, Haldirams has established quality standards in its field. While restaurants and casual dining was the beginning, packaged products now make up 80% of its revenues. Haldirams has surpassed various renowned brands including five of its regional rivals — Balaji Wafers, Prataap Snacks, Bikanervala, Bikaji Foods and DFM Foods — combined, and emerged as the leader in traditional snacks market.

According to Devendra Chawla, the Future Group president who recently launched traditional aloo bhujia in peri peri, wasabi and schezwan flavours, “Food is culture in the country and Indian food should do well. But consumers are experimenting with food and it is under scrutiny. Companies would have to adapt and stay relevant especially for millennials.”

It has been observed that the western snacks companies controlled primarily by Pepsi Frito Lays and ITCBSE -0.88 % Foods are gradually entering into Haldiram’s turf. For instance, Pepsico’s Kurkure has 16 variants of Indian namkeen while Paper Boat will soon enter the category. Certainly, the growing popularity of the Haldiram’s among people has made it the pioneer of snack food industry.