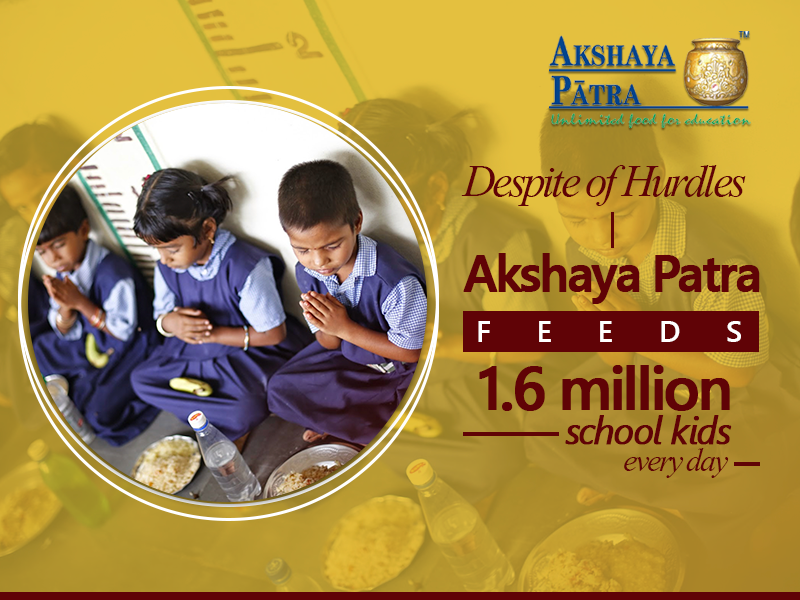 “It dates back to 2004, when Akshaya Patra Foundation (APF) attempted to commence its operations in Delhi, but despite the support of telecom magnate Sunil Bharti Mittal, there were statutory interests and knotted threads of administration which led to a massive set back,” recalls Jai Chaitanya Dasa from APF.

Few years down the line, Delhi Chief Minister Sheila Dixit proposed Akshaya Patra to set up a kitchen in the capital and feed 2.5 lakh children daily. However, still things didn’t work even when the Lieutenant Governor was encouraging.

APF sought for permissions and despite Dixit’s pressure on the officials, they weren’t cooperative and she finally ended up, saying: “You don’t understand Delhi.”

The major obstacle was the disagreement between Delhi government and APF on setting up menu government costing Rs 17 per meal, against the countrywide norm of Rs 7.

Hence, an unhealthy situation was created– for the deprived children and for Akshaya Patra. It was finally decided to close down the kitchen. This was one time that Akshaya Patra had been unsuccessful in its endeavours. APF faced alike obstacleS in other parts of the country too, particularly in Vrindavan and Bhillai, and the state of Odisha.

Nevertheless, Akshaya Patra fortified, backed by individuals like Madhu Pandit Dasa, President of ISKCON, Bengalore; Mohandas Pai, the then CFO of Infosys and now Chairman of the Manipal Global Education Group; Chanchalapathi Dasa, Vice-President of ISKCON, Bengalore; Raj Kondur, a Harvard Business School graduate and venture capitalist and Jai Chaitanya Dasa — and most importantly Sudha Murthy, the wife of Infosys co-founder Narayana  Murthy and an evangelist in her own right.

There was a positive impact of Akshaya Patra on the outcomes of education. The food served by APF was ‘more than a meal’. It was an incentive to come to school and study better.