The inclination of Sahara India Pariwar, one of the largest employers in our country, is known to all. The Subrata Roy-led company had sponsored the Indian cricket team for more than a decade, apart from starting Force India Formula One Team, as well as the badminton team ‘Awadhe Warriors’.

Inculcating a sporting culture among its employees, Sahara India Pariwar is organizing indoor games for its employees. The games coincide with the celebration of Bharat Parv. A mesmerizing opening ceremony was also hosted at the third floor of Sahara India Tower in Lucknow, which was presided over Deputy Managing Worker OP Srivastava as the chief guest.

Sahara India’s previous stints at sports have been quite successful. The conglomerate was one of the primary sponsors of Team India. The Sahara Force One F1 Team has been a ‘first of its kind’ initiative, while the Sahara-owned badminton team Awadhe Warriors has performed pretty well in the three seasons of Premier Badminton League.

Being one of the largest private employers in the country, Sahara India Pariwar aims at enhancing employee engagement through the week-long indoor games. Sports are proven to enhance camaraderie and the sense of collective responsibility among the employees, and that’s what the company is aiming to promote through the event. 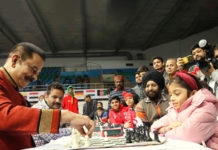