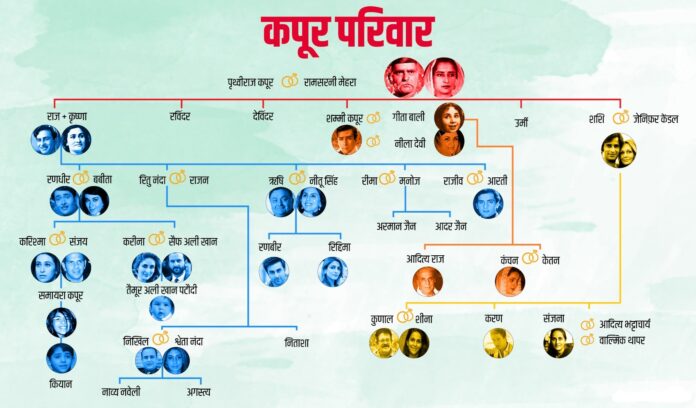 “Kapoor dynasty” also called “The First Family of Indian Cinema”, with at least 5 generations of direct descendants over 92 years in the film industry, has had the largest impact and longest history of quantitative and qualitative contribution in Indian Hindi cinema.

Mentioned below is the list of all the four generations of Kapoor Family:

Prithviraj Kapoor, born in Punjab, was the first to set his foot in the entertainment industry. Born in 1906, he married Ramsarni Mehra, 14, at the age of 17. 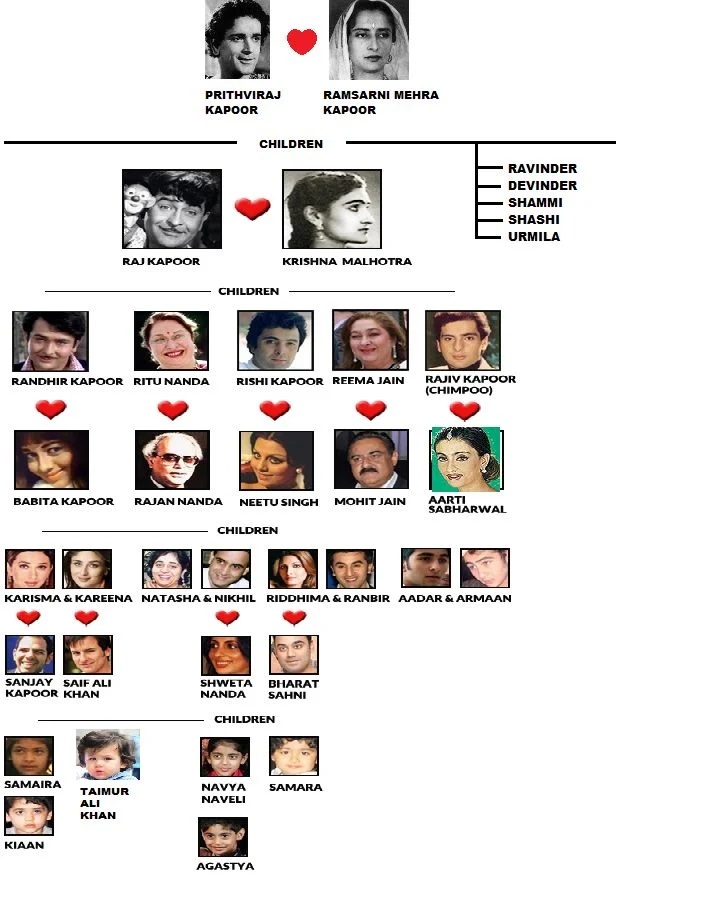 Prithviraj Kapoor had three children – Raj Kapoor, Shamsher Raj and Balbir Raj, with each one of them going on to earn significant names in the industry. While Raj Kapoor decided to use his birth-name in the industry, Shamsher and Balbir opted for stage names such as, Shammi and Shashi, respectively.
Raj Kapoor was also known as the greatest showman of Indian cinema and married Krishna Malhotra in 1930.
Shammi Kapoor married Geeta Bali, who had an untimely demise in the year 1965 due to smallpox. He later married Neila Devi in 1969. Shashi Kapoor married an English actress in 1958.

The third generation of Kapoor family also earned fame  in Bollywood. While Raj Kapoor’s sons Randhir Kapoor, Rishi Kapoor and Rajiv Kapoor made their career in acting, daughters Ritu Nanda and Rima Jain decided to keep out from the entertainment industry.

Randhir Kapoor had Karisma and Kareena Kapoor with his wife, Babita. Karisma Kapoor, now divorced, was married to Sanjay Kapoor while Kareena Kapoor married Saif Ali Khan, an actor and Nawab of Pataudi.

Ritu Nanda, who was married to Rajan Nanda, has a son, Nikhil Nanda. Shwetha Bachchan is married to Nikhil. Married to Manoj Jain, Rima has two sons who are both aspiring actors, Armaan Jain and Aadar Jain.