The rising prices of crude oil and disruption in the supply chain due to the Russia-Ukraine crisis could further sap India’s economy, which is already in the doldrums due to the Covid-19 pandemic. The higher prices would widen India’s trade deficit, posing risks to private investments that would lead to higher inflation.

Last week, crude oil prices shot above USD 105 per barrel. India, which nearly meets 80 percent of its oil requirements through imports, could be hit by the widening trade deficit, said the economists. The “surging oil prices due to the Russia-Ukraine crisis pose considerable risks to the Indian economy”, said Aditi Gupta, an economist at Bank of Baroda.

The three COVID-19 waves have stricken small businesses, the tourism sector, educational institutions, and retail, among others. Private consumption, which nearly contributes 55 percent to India’s GDP is still below pre-pandemic levels, even after the two years of disruption. At this juncture, the slower pace of expansion could hurt investment and job creation, testing monetary and fiscal policies that have remained loose despite rising inflation pressures.

However, the government says that the economy has been recovering due to its reforms and vaccination program and that the third pandemic wave in January had a scanty economic effect. “Supply shortages remain a near-term headwind. But when they do ease, the recovery should start picking up in earnest,” said Shilan Shah, an economist at Capital Economics in Singapore.

Since March 2020, the Reserve Bank of India (RBI) had slashed its repo rate (the interest rate at which it lends money to commercial banks) by a total of 115 basis points to cushion the shock of the COVID-19 pandemic.

“When value chains are facing challenges and threats because of these disturbances, our recovery, not just for India, but countries everywhere will be severely hampered,” said finance minister Nirmala Sitharaman on Friday. “Hopefully, some kind of restoration of peace at the earliest will happen based on which recoveries can be sustainable.” 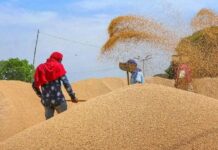 Wheat export banned in India: How will it impact inflation?