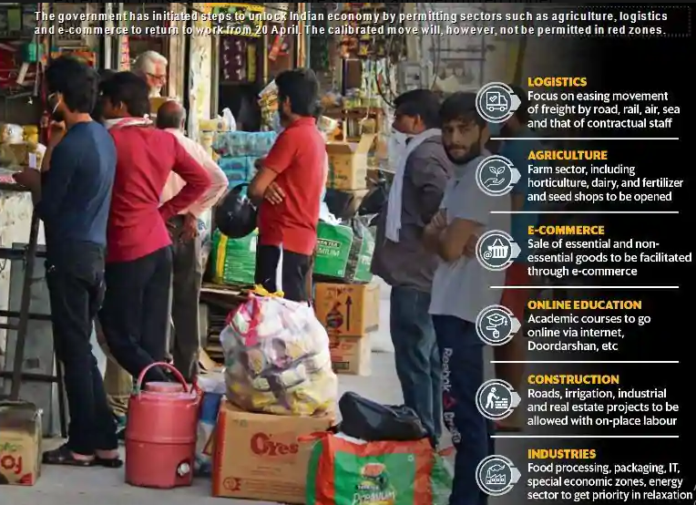 With over 12 K cases and 400+ deaths, India has overtaken the likes of Japan and South Korea in the number of positive COVID-19 cases, even though the oriental countries reported them much before India due to its proximity to China- the epicenter of the virus. Despite preemptive and swift measures by the Union government to tackle COVID-19 pandemic such as the nationwide lockdown, the cases have continued to grow. It is for such reasons, Prime Minister Narendra Modi on 14th April 2020 extended the country’s 21-day nation-wide lockdown, the same day those restrictions were supposed to be lifted.

However, to minimize or limit the damage to the economy, Prime Minister hinted at the cautious approach to the reopening of businesses post 20th April. Starting 20 April, India will allow key drivers of the economy such as agriculture, infrastructure, logistics, infrastructure, to return to work in areas where no infections have been reported.

This step comes at a very crucial time when the country is also on the verge of an economical fallout which has already affected the livelihoods of as many as 400 million poor. To be sure, the new Union home ministry’ guidelines will not apply to containment zones, areas with COVID-19 infections. Restrictions in these areas won’t be lifted. Furthermore, these permissions are conditional and would not come at the risk of corona virus outbreak spreading further through community transmission.

No activities, unless specified as specifically permitted under the guidelines of Union ministry of health and family welfare would be permitted if in case the area gets categorized as a containment zone, the government said in a statement.

While few companies welcomed the new guidelines, economists said the steps do not go far enough to boost growth during the current fiscal. India could look to exit the lockdown via a decentralized strategy, which may involve dividing the nation into green, orange and red zones.

The relaxation of lockdown after 20th April is in the right direction and may revive key parts of the Indian economy said lobby group Confederation of Indian Industry in a statement.

Besides agricultural and related activities, the government has also allowed people to take up jobs under the MGNREGA, a rural job generation programme.

The order issued by the home ministry also stressed on the movement of trucks from 20 April to clear the logistics logjam- providing much-needed relief to the truck drivers.

Also, construction activities can commence provided the workers stay available on site. This attempt by the government could prevent the current upheaval from developing into a deeper social crisis.