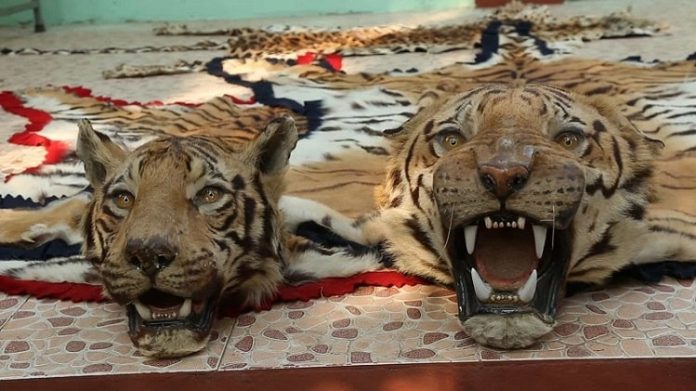 Although India boasts of nearly 3,000 tigers across the length and breadth of its forests, the country has witnessed a major spike in hunting during the lockdown period enforced by the government to stem the spread of coronavirus.

According to the wildlife trade monitoring network Traffic, 88 hunting incidents have been reported in the post lockdown period from March 23-May 3, almost double the number reported during the six weeks before lockdown.

As International Tiger Day is observed on July 29th every year, the Indian government said in a report on Tuesday that the overall tiger population in the country was estimated at 2,967.

Out of this, 83% were actually camera trapped individual tigers and rest were recaptured. Another official data suggests that India has lost 110 tigers in 2019, one-third of them due to hunting.

A total of 222 persons were arrested in hunting related cases by various law enforcement agencies during the lockdown period across the country, significantly higher numbers, as 85 suspects were arrested during the pre-lockdown phase. Over the last eight years, 750 tigers have died in the country, most of them fell to the bullets of hunters, revealed the government data.

Experts believe that a spike has been also noticed in hunting of other animals that these tigers depend on for food. Speaking to Anadolu Agency, Faiyaz Khudsar, a wildlife biology scientist said that the loss of livelihoods due to the lockdown and food shortages has forced people to resort to illegal hunting for sustenance.

“The pandemic is pushing people into all sorts of illegal activities and hunting is no less. The hunters are taking advantage of the crisis and selling the meat. Bushmeat consumption has also increased,” said Yadvendradev Jhala, a senior scientist at the Wildlife Institute of India, a government institution run by the Indian Council of Forestry Research and Education.

Must Read – Animal Cruelty Issues Shown Not Only To Prevail Among House Pets, Advocates Emphasize On Animal Testing Risks

India has 25% of the world’s tiger habitat, with 50 designated tiger reserves, but shelters 75% of the global tiger population, according to the numbers recorded by a government agency Project Tiger.

Khudsar says that the habitat for the tigers and other animals is decreasing, leading to their straying and in turn getting killed by the hunters.

“It is important to form corridors of territorial forests with extended agricultural fields to save the animals. As of now, only forests are patrolled, not the agricultural fields, which leads to open ground for hunters,” said Khudsar.

He also said that due to limited areas around territorial forests the wild animals come face to face with domestic animals. These domestic animals may in-turn become carriers of zoonotic diseases.

“If hunting of small animals remains unchecked it will lead to depletion of a prey base for big cats like tigers and leopards and a depletion of the ecosystems. This in turn will lead to higher incidences of human-wildlife conflicts and will undermine the significant successes that India has achieved in the field of wildlife conservation,” said Ravi Singh, chief executive officer of WWF-India.