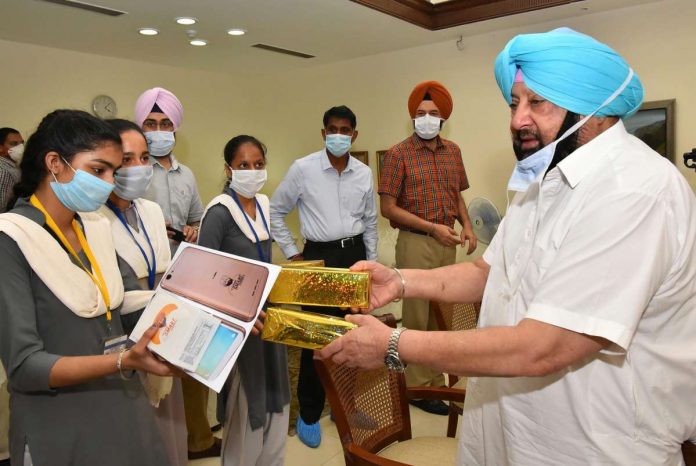 The Punjab government rolled out the much-awaited smartphone scheme on Wednesday, distributing free mobile handsets to some Class XII students of state-run schools. The scheme saw light of the day more than three years after the Congress came to power in the state.

Must Read – Delhi: Man killed after argument over leaving pet dog without leash

Giving free smartphones to the youth of the state was one of the key poll promises of the Congress during the 2017 assembly elections. Chief Minister Amarinder Singh on Wednesday launched the ‘Punjab Smart Connect Scheme’ through video conferencing here on the occasion of ‘Janmashtami’ and the International Youth Day.

He handed over smart phones to six Class XII students in a symbolic gesture. To avoid large gatherings, simultaneous distribution of phones was done at 26 places by various ministers, MLAs and others across the state to launch the scheme. Each minister personally handed over 20 phones in various districts, as per a government release.

The scheme will benefit a total of 1,74,015 Class XII students of government schools in the first phase which will be completed by November this year. The state government had allocated Rs 100 crore for this scheme in the state budget for 2017-18.

Out of the 1,74,015 students, 86,620 are girls. The chief minister said that he wanted Punjab’s students to be abreast with the latest technology which they can use effectively for their education. The smartphone being distributed under the scheme is a good functional phone, the CM said, adding that it will become a major tool for the education of the students.

Earlier speaking on this occasion, Education Minister Vijay Inder Singla said that a sum of Rs 92 crore was being spent on procuring these smartphones. He said that the students of Class XI would also be given smartphones in the second phase.

The state government had signed a contract with Lava International for delivery of smartphones. The phones, bearing a picture of the CM, are equipped with various smart features such as touch screen, camera and pre-loaded government applications like ‘e-Sewa App’.